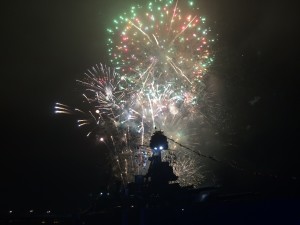 Weekend before last, we made the journey down to Houston for the 100th anniversary celebration of the USS TEXAS. Since I serve on the State Park Advisory Committee, I felt like it was the perfect time to go investigate the battleship’s present condition and discover what our options are for its future.  Other than some pesky showers, it was a grand day with tours of the ship, a WWII reenactment, exhibits, and a concert finished off by Robert Earl Keen and spectacular fireworks that silhouetted the great ship.

Many will remember that the TEXAS has had major leak problems in the recent past. Currently the State is spending $18,000,000  on the old ship to keep the engines from falling through the rotten keel.  In the very near future, Texans will have to decide if they want to spend huge dollars to save the ship, or spend huge dollars to scrap the one of a kind vessel. We were given a tour by the engineer in charge of the repairs and he provided an up close look at the corrosion problems  below the waterline. It is believed that the costs to do either may end up about the same.  The ship is so fragile that it cannot be towed for fear of sinking in the Houston Ship Channel.  It must either be dry docked where it is, or a salvage yard will have to be built in the park in order to cut it up.

Berthed in the San Jacinto State Park, the very location of the Battle of San Jacinto, it is often argued that the Battleship should have been placed elsewhere.  Of course it is too late in the game to alter that.  San Jacinto has many supporters who want the site to be returned to the condition it was at the time of the Battle. I would expect that much of that restoration will take place.  The big question is will it take place with the battleship standing majestically to the side, or will it be removed in pieces and sold by the pound.  Only time and the Legislature will tell.